We do not know for sure when humankind began to weave tapestries. The oldest existing woven tapestry dates from the fifth century before Christ. It was discovered in 1949 by the Russian archaeologist Serghei Ivanovitch Rudenko in the grave of a Scythian leader in the valley of Pazyrik in the Altaï Mountains in Siberia at an altitude of 1650 metres (preserved in the ice). It is a woollen tapestry with symmetrical threads (threads from Ghiordes) and a short pile and is of very high technical and artistic quality; it has a thickness of 3600 threads per square decimetre measuring 2m x 1.83m and is currently being preserved in the Hermitage Museum in St Petersburg. Although it is impossible to establish the origin of the Pazyrik tapestry with certainty, it is most likely the work of nomadic people. 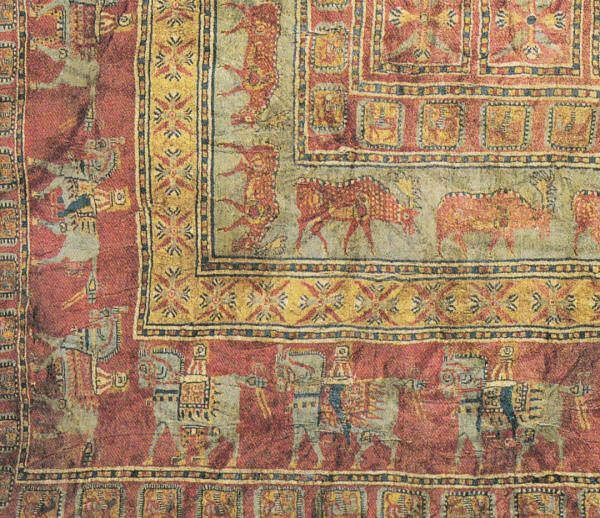 Tapestry, genuine art and the pride of the East, reached us at the time of Marco Polo. Its splendour has penetrated the soul of western culture and ever since the full development of sea routes it has been firmly anchored all over Europe, and yet the West has never been able to adapt it because it can never be imitated.

In fact, tapestry belongs exclusively to eastern culture. Many tapestries are imported into our country from the East, mainly from Turkey, The Caucasus, Iran (ancient Persia), Afghanistan, India, Pakistan, Islamic China, North Africa, and The Balkans.

In centuries past it was considered to be a treasure of great value, but today it has become a current work of art because the price is no longer an obstacle.